Hopefully the audience for this blog won’t be limited to people living in Copenhagen, especially not just ex-pats living here. But if you are an ex-pat living here, or thinking about moving here, below are some tips that might be worth reading. I don’t claim to be an expert, and certainly having a Danish wife was an immeasurable help to me, but here are some things I picked up during my move which you may find useful.

Also check out my Links page for some personal recommendations on things to do in Copenhagen.

Learning Danish is difficult, as any new language will be to most people, but in my opinion it’s vital, for several reasons:

1. Danish is considerably different to English, so is not a language you’re likely to have residual knowledge of (like, say French from school),so a formal approach to learning it is a must.
2. The best advice I was given before starting to learn Danish is that I’d be learning 2 languages – how Danish is written on the page, and how it sounds when spoken. They are markedly different, and for me, a formal education in that difference was the only way I’d learn about it properly.
3. It’ll help you fit in, not just enabling you to navigate around things more easily but the Danes are always impressed when you tell them you’re learning because a lot of people don’t. I’m sure this goes for other countries too.
4. It’s hugely satisfying! Learning as an adult is rare, at least for me. Approaching education with an adult attitude (as opposed to the begrudging teenage mindset that I associate with school) is really refreshing, and much more rewarding.
5. You’ll meet people in the same boat as you, from lots of different places.

There are many schools out there but this is mine, and I’m getting on well there.

because I was a resident. Had I been a tourist I would have just brazened it out and launched into slightly apologetic English. But because I lived here, I felt like I should be speaking Danish. Of course I couldn’t, so I ended up being very awkward when I tried to talk to anyone in a shop or elsewhere.

Perhaps that’s just me, but if you feel the same, my advice if here is not to worry – Danes speak excellent English, and are happy to practice it, so as long as you’re polite, they won’t mind at all. Get up to speed quickly on the basic pleasantries though, which any phrasebook can teach you. Find an audio version online though because as above, Danish doesn’t sound anything like it looks on the page!

And when you do start to practice your Danish out in the world, be prepared for some blank looks. This isn’t rudeness (though can be a little disconcerting if you’ve plucked up the courage to speak Danish), but I believe it’s due to the fact that Danish is very rarely spoken by anyone but Danes. As a Brit, especially in London or other major cities, we take for granted that we’ll hear English spoken with many different accents and pretty quickly develop a filter to not even hear the accents. But that’s not the case with Danes. With a population of only 5 million, and very few places outside the country speaking it, it’s not often most Danes will hear their language with a foreign accent. Consequently, if it’s not perfectly spoken, they struggle to catch what you say. Don’t take it personally and just try again. That’s what I tell myself!

Insurance number, except seems to be much more important to the Danish welfare system than the NI is in the UK. You’ll need to register as a resident first (you get 3 months grace if you’re from the EU), which you can do by proving you have a job, or a guarantor, or sufficient independent funds to stand on your own two feet (I think they’re looking to see about £8000 in a bank, or thereabouts). Info here and here.

Once you’ve done that, you can apply for a CPR number. It comes as a credit card sized yellow card which will quickly become your best friend. You’ll need it to get a bank account, get a mobile phone contract, internet at home, rent a flat, register with a doctor – pretty much anything where you need an official presence. It’ll also get you free Danish lessons for three years. More info in English here, and don’t be fooled by the talk of healthcare – in my experience it’s about much more than that. 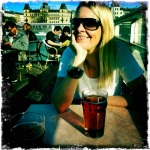 London’s not a cheap place to live, but Copenhagen gives it a run for its money. The currency is the kroner (Danish for crown), and as a rule of thumb I estimate at dividing crowns by ten, then adding about 10%, to get the £ equivalent. So I’d say 100 kr is about £11. Just checking that on my Convertbot app, and actually 100 kr comes out at £10.75, so I’m not far off.

And it’s swings and roundabouts – going out (food and drink) seem to be more expensive (that pint that Dorte’s pictured with above cost £6, albeit at somewhere quite touristy) but the cost of living (bills, rent, property) is definitely cheaper than London. Clothes seem to be about the same, if not a little cheaper here.

Copenhagen is a city of cyclists – watch out for the dedicated bike lanes that are everywhere. It’s the best way to get around, so hire one or bring one with you. Forget about driving unless you live out of town, and the public transport is patchy because there’s not a huge demand for it, though the city is being dug up at the moment for massive expansions to the Metro line.

Despite Danes being judged the most happy people on earth, in some quarters they have a reputation for being rude (funnily enough, there’s no word for ‘please’ in Danish, which some would say tells you a lot). The way I see it though is that they just don’t bother with unnecessary etiquette, but if you actually chat to a Dane, the vast majority of them are very warm, kind people who are always eager to help out. Of course there are exceptions – but I’ve never been anywhere where that wasn’t the case.