My Most Scandi Day Ever

There is a lot about Scandinavian life that suits my temperament, and there’s no better example of that than one day on our honeymoon in September when I had My Most Scandi Day Ever.

So where exactly is Scandinavia? You probably already know but before I met Dorte I don’t think I would have said with any certainty exactly which countries comprise Scandinavia, so forgive me if I’m stating the obvious to tell you that Scandinavia is Denmark, Sweden and Norway. I do see mentions of a wider definition of the ‘Scandinavian region’ which also includes Iceland and Finland (and the many islands, such as the Faroe Islands) but technically it’s just Denmark, Sweden and Norway. So that’s the definition by which I judge My Most Scandi Day Ever. 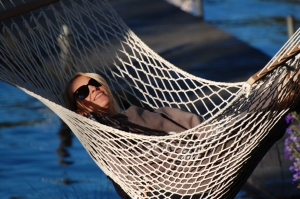 Sweden’s a stone’s throw from Copenhagen, over the epic Oresund Bridge to Malmo, so we chose that as our honeymoon destination (Sweden, not the bridge), for a more relaxing break than getting on a long haul flight to Singapore or Argentina, or any of the other more exotic locations we’d been mulling over. So there I was, sitting in our idyllic Swedish summerhouse (complete with lake, multiple barbecues and its own floating sauna), with my wonderful new Danish wife, and we’d spent the afternoon watching two Norwegian films. Tick, tick and tick.

And in case you don’t think of Norway as a place that makes good movies, I’ll point you in the direction of Headhunters and Troll Hunter. Perhaps The Deerhunter was really Norwegian? Headhunters is a great crime thriller, with the realistically bone-crunching approach to violence that you’ll know to expect if you’ve watched any of the original versions of The Killing, The Bridge or The Millennium Trilogy. It’s based on a Jo Nesbø book, the hugely successful Norwegian crime writer who’s yet to reach the international acclaim of Stieg Larsson. And Troll Hunter is a fantastically fun movie about three students making a movie about a strange old loner who apparently hunts trolls in the Norwegian wilderness. Go and rent them both now and if you watch an episode of The Killing and are sitting on an Ikea sofa, then you too can have a Scandi day just like me.

The bike for me »
« Ed Thigpen resting in Copenhagen