Five days off! That’s Easter (or Påske) in Denmark – the Thursday, Friday and Monday around Easter weekend are all public holidays here.

We took full advantage and on Sunday took the short train ride up the coast to north of Copenhagen city centre – to Dyrehave (‘the deer park’).

It’s a large park/forest that’s packed with some notable features. There’s Bakken, the world’s oldest amusement park; there are a lot of wild deer (hence the name, of course); several restaurants housed in old barns and manor houses; a distinct old-time feel coming in large part to the constant stream horse and carriages loaded with visitors to the park itself; and my favourite part, the King’s old hunting lodge, which had a beautiful view down broad sweeping grassland and out on to the coast – which was the second part of our day out and another big tick in Dyrehave’s favour because it was so easy to combine the two.

But perhaps the biggest compliment I can pay to Dyrehave is that it kept Peanut going for her longest walk ever. Mind you, she was (excuse the pun) dog tired and very happy at the end of it, as we all were. 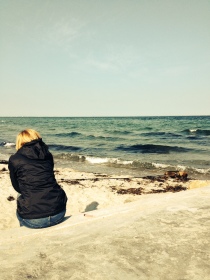