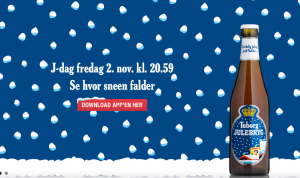 Every year, in early November, the beast that is Carlsberg’s marketing department, whip sections of the populous into a frenzy for the release of their julebryg (Christmas brew).

I happened to be in CPH last year and saw the carnage that ensued, as hordes of youths marauded through the streets, cases of julebryg in hand, as promotional teams handed freebies out for the first couple of hours. So last night I went out with a certain amount of trepidation to Bang & Jensen, a decent local bar on Istedgade, with my American friends Eric & Cecelia (more about them to come, I’m sure). We tried Mc Kluud at first (“The western bar on Vesterbro”) but found it hard to breathe in there as it’s a bodega where smoking’s still permitted.

So we sat at the bar and waited for the very specific country-wide release time of 20:59, and enjoyed our first couple of pints of Tuborg Julebryg for free (above). Again, part of the Carlsberg promotional tactics, the mother company of Tuborg. It’s an okay beer, quite sweet and with a tiny hint of Christmas spices, but its saving grace is the old fashioned artwork – I was told that they tried to update it a few years ago but public outcry changed their mind. More marketing nous, perhaps?

Anyway, it felt like a very Danish night – waiting excitedly for the release of the new seasonal beer (they also do an Easter brew), and one I’m glad I got involved in, albeit in a fairly modest way. 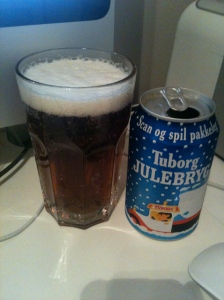 One street at a time »
« Why I’m writing this