The first of many words…

I’m sure this won’t be the last time I want to write something about the Danish language, but I’ve been storing up a few examples lately for anyone not familiar with Danish, just to show you some of the fun bits of learning a new language. And before I go further, big thanks to Eric & Cecelia for their tireless efforts in finding funny Danish words.

These examples won’t win me any linguistics prizes for insight, but they’re all interesting or amusing in their own way. As I learn Danish (and through my writing in English for various reasons), I think about language a lot, and specifically where words came from. A blog post like this is about as scientific as it gets for me though, but I won’t use that as an excuse to dwell on the completely puerile. But a little bit of puerile goes a long way, so let’s kick off with some words that will always raise a smile if you’re at all still in touch with your inner adolescent. So to warm us up here are some guilty pleasures of Danish words that sound like rude English words…

Fartpilot – ‘fart’ means speed (so you’ll see it liberally written all over road signs) and this word means autopilot in a car
Slutspurt – ‘slut’ is to end and spurt is the last bit (the sprint, if you will), so this pops up in big neon letters in shop windows in the last days of the sales
Slags – another one from the shops, this just means kinds/types, but can definitely bring out a smirk when seen on a sign saying something like ‘3 Slags 150kr’

But moving swiftly on to some of my favourite Danish words so far. These are examples of words that make perfect sense when translated but they convey a different meaning to their English counterpart and often seem to be more literal. They’re the ‘does exactly what it says on the tin’ category.
Støvsuger – a vacuum cleaner, but literally a ‘dust sucker’
Proptrækker – a bottle opener, translating as a ‘cork puller’
The Danes don’t have a specific word for village, instead preferring to call them landsby, or ‘country town’
And finally, the Danish word for a tip (as in to tip a waiter), definitely makes a lot of sense – drikkepenge, or ‘drinking money’.

And my final section are the brilliant words that don’t really make a lot of sense when translated to English, but they presumably must have some wonderful history behind them resulting in a word today that can seem a little surreal. I need to do a little more research on some of these to find exactly how they came about…
We would call it a hippopotamus but here it’s known as a flodhest. Which rather wonderfully means ‘river horse’. I’m no David Attenborough, but they’ve never struck me as particularly equine.
Jeans are often referred to now as just that, jeans, in Denmark, but it’s also not uncommon to hear them called cowboybukser, or ‘cowboy trousers’. Hollywood’s got a lot to answer for.
And one for the Swedes out there, carbonated water seems to have been claimed as Denmark’s own, as it’s known here as danskvand (‘Danish water’). Apparently that always tickles the Swedes when they hear that one. 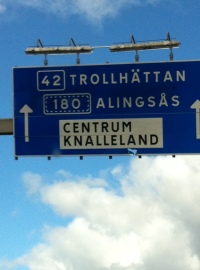 But this isn’t just a Danish to English matter – on our honeymoon in Sweden, Dorte was positively delighted to see a sign to Knalleland, which in Danish means something along the lines of ‘Shaggingland’. So of course we took a photo (left).

I really love all this. It’s a great pleasure discovering new words and phrases that please the ears because as well as being a functional device ultimately if language can bring a smile to your face then that’s a very worthwhile added bonus.

So if anyone has any other suggestions for round two, I’d love to hear them.

Snow in Copenhagen »
« A stay at Falsled Kro