We had a full day of flat viewings lined up yesterday, as we’re set to move in the spring, but that became a non-event as we were defeated by the snow storm that hit about 9am.

It was impressively persistent and is still going nearly 24 hours later, with just a few pauses in that time. The most comforting thing though is how prepared people are – including ourselves! It’s a fact of life here so there’s no using it as an excuse, which is a nice feeling really.

So we donned our big coats and boots and got on our bikes at 9.30am yesterday morning, but only managed to see the first two flats before having to rethink our plans for the rest of the day. I risked broken bones by riding one-handed for a few seconds to take this picture of Dorte on her bike…it got a lot worse after that, but if anything it’s now just an excuse to put a few more candles on and get really hyggeligt. 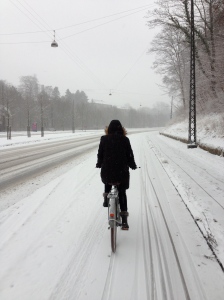 CPH Post review: Lundgren Torvet »
« The first of many words…