Have a seat because I want to tell you about a very special bridge.

Not far from where I live in west Copenhagen there is a bridge, called Bryggebroen (“the quay bridge”). It crosses a wide stretch of water from behind Fisketorvet mall (“the Copenhagen Mall”) to the modern high-rises that define the recent regeneration of Islands Brygge (“Iceland’s quay”). Here it is… 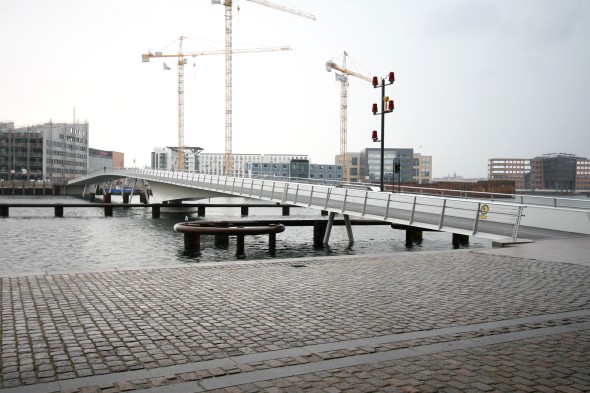 For a start, it has two sides separated by a sturdy barrier – one for walkers, so they can stroll across and admire the view at their leisure, and one for cyclists, so they can speed across and escape the often chilly winds coming off the water beneath, without fear of smashing in to an ambling pedestrian. It’s an obvious solution to a clear potential problem. But it’s amazing how few other bridges I’ve ever seen employ it.

Secondly, it’s a special bridge for me. When we first moved here, it was early spring, and we picked a jogging route that took in this bridge. I remember vividly running across it with a sense of awe – partly at the fact I was out running (something that I’ve only really picked up since moving here), and partly because if you get lucky with the light you can be treated to some gorgeous scenery. It definitely symbolises the hope and excitement I had, and still have, about living here.

But the final reason why this bridge is special is because of padlocks. I don’t know why, but the metal ropes that form its fences are covered in thousands of locked padlocks, most with initials or dates written on them. My early theories were that maybe this was a sort of bike mausoleum and that people put a padlock on the bridge when their bike expired (I think I may have been taking the whole “Danes really love their bikes” theory a little too far there though). But I think it’s more to do with people, and couples in particular. Certainly this second theory has been given weight recently when one of my English friends in Copenhagen, Sean, has upped sticks with his Danish wife Julie, and moved to Brazil. Before they left, they added a padlock of their own (the one pictured above). I haven’t spoken to him in detail about it, but here are his own words which pretty much explain their thinking…

“We wanted to do something symbolic before our move to Brazil. Our wedding was, of course, a significant and wonderful event, but nothing communicates lifelong commitment quite like a bit of vandalism…”

So Sean, if you’re reading this, I’d love to know what you know about the bridge. And also, what happens to the key??? I’m hoping it got tossed into the watery deep below, but maybe that would have been an act of vandalism too far….

When Oprah came to town »
« CPH in the winter

3 thoughts on “The Quay Bridge”