About a week ago, we went to see the Triple E, the world’s largest ship.

Built for Danish shipping giants, Mærsk, it pulled up in Copenhagen for a week, and a select part of it was open to the public to view for free. Pretty cool, I thought.

It’s the kind of slightly random thing I wouldn’t have got round to in London, but seemed completely natural here. And boy, it is big. You can read all about the details on the imaginatively titled website WorldsLargestShip.com, but some stats are eye-opening enough for me to share. It weighs 165,000 tonnes WITH NOTHING ON IT! It’s 400 metres long and can carry over 18,000 containers. Sheesh.

But the one stat I haven’t found out is how many crew it has. Judging from the size of the crew cinema (about 20 seats) and the gym and other recreational areas, it’s not a big crew at all, and I was actually most interested in the crew’s quarters – how do you live on a ship like that? There were a few crew members sitting in their cabins, with a red tape across the door to tell the tourists not to enter. They were all south-east Asian and just sitting there smiling in a slightly befuddled way at how interesting they were to the thousands of people walking past.

Anyway, it’s was a fun hour doing something a bit off-the-beaten track. Well, it was different at least for this Brit. 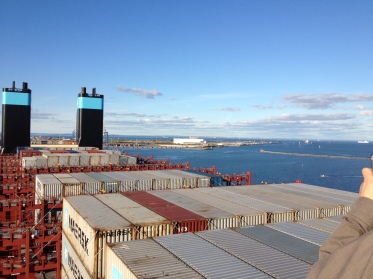 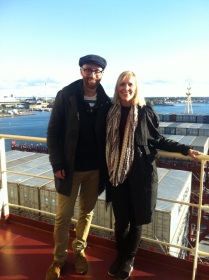 Scones and hoops »
« Graveyards in Autumn